Happy Birthday to Me!

On Friday, I stopped at the APO to check the mail and was told we had a package. I was expecting it to be a birthday gift from my parents. When the box said Mrs. Field's cookies, I was a bit confused. When I opened the box I was so surprised to see this beautiful cookie cake sent from Sofia, Rob and Brandon: 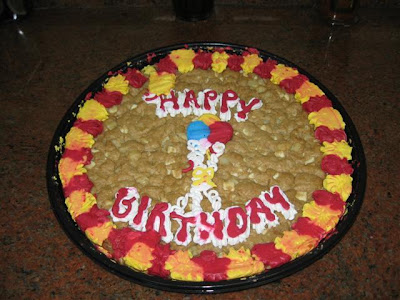 On Saturday, we had a relaxing day. Ronnie wanted to buy me some new shows for my birthday so we started the day at the mall on a hunt for new shoes, but we didn't have any luck. We went to TGI Friday's for lunch then off to the spa for a couples massage. This was my first professional massage and it was fabulous!! We'll definitely be doing that again. Luckily, the spa often offers 2-for-1 specials to the Embassy so the both of us got a 45 minute massage for $55! After our massage we decided to head to another mall, but again, we had no luck with the shoes so we called it a day and headed home. Later on in the evening we met Denise for sushi then came back to the apartment until Denise's ride came. It was a great day. Since a lot of my friends here were just getting back from traveling we postponed the big night out for next weekend. We're having friends over for drinks then we're going to a bar called FlashBack. They play only 80's music and is supposed to be lots of fun! Wish you could all be here to celebrate with me.
at 8:19 PM 2 comments: Links to this post

Email ThisBlogThis!Share to TwitterShare to FacebookShare to Pinterest
Labels: Birthdays/Holidays/Anniversaries

Many of you have probably heard of some New Year's traditions...eating grapes at midnight, eating lentils for good luck...well, in Ecuador, the traditions and customs get a little more outrageous.


A few days after Christmas, all the street vendors go from selling Christmas decorations to selling "años viejos" (old years), effigies representing local and international politicians, famous celebrities, cartoon characters, or other people who have been in the news, generally for scandals. The effigies are made from old clothes sewn together and stuffed with sawdust, newspaper or any other flammable material. At midnight it is beaten and burned for all of the trouble it has caused in the year. In the late afternoon on New Year's Eve the men, dress up as viudas, the widows of the dying year. These viudas, however, are not very upset about their husbands' death, and tend to act promiscuously. They dress in skimpy black clothes and the viudas stand outside on the streets asking passing cars for money to help pay for their husband's funeral. The money collected is used for the New Year's Eve party. It was pretty hilarious to see this on just about every street corner on our way home from work. Luckily, people warned us in advance so we made sure to have coins to give out.

The burning of the effigies began a few days before New Year's. You could see piles of ash all along the streets. This was one we saw from the living room window: 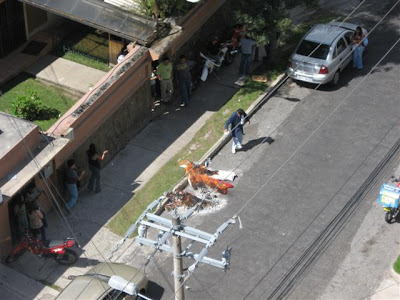 We decided to buy one and bring it with us to the party we were going to. When we first walked up to the stand, the people immediately knew we were Americans and assumed we wanted a George Bush effigy, but everyone agreed that there was someone else we'd rather beat and burn: 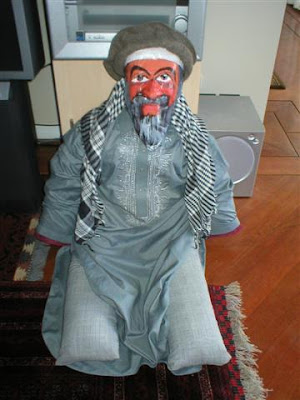 The clothing on him in the above picture is authentic clothing Ronnie had from his time in Afghanistan...we didn't burn him in those clothes.


Ronnie thought the masks were pretty neat so he got one for himself... 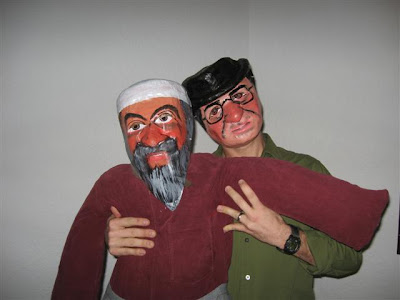 As it got close to midnight, we went downstairs to get Osama all set up for the burning. Everyone at the party was looking down from the balcony. Ronnie got his first few kicks in: 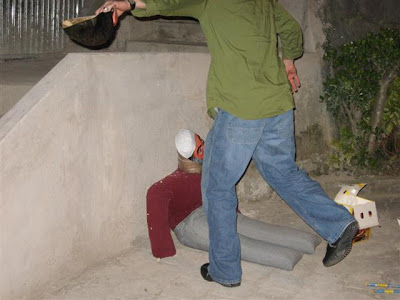 Then Paul got some extra flammable materials around him: 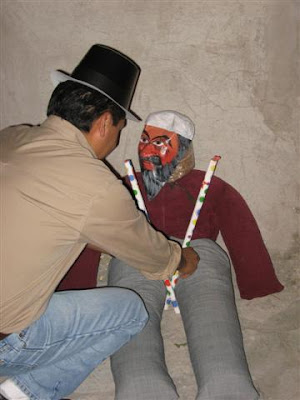 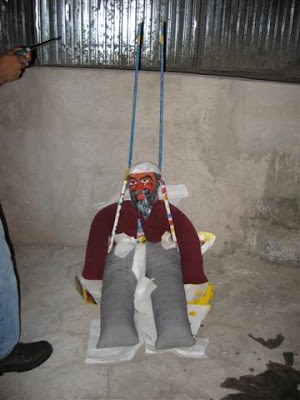 And just before midnight he was set ablaze! 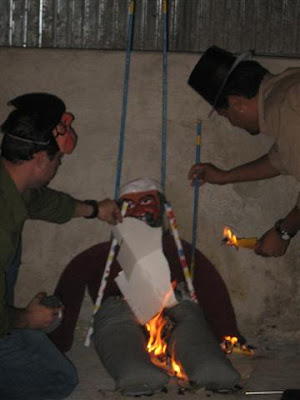 We made it back upstairs for the countdown to midnight. 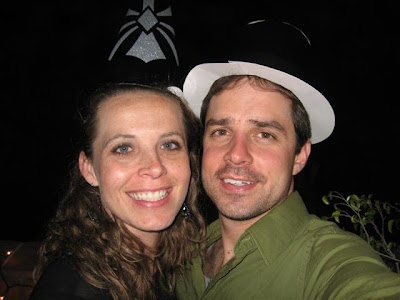 Unfortunately, Osama didn't burn very well, so Ronnie gave him another kick and Paul lit him up again: 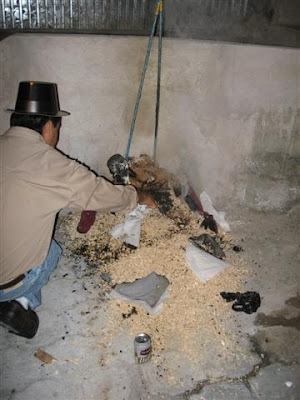 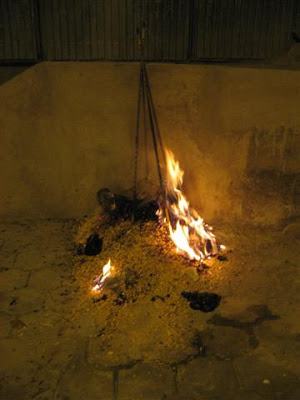 All in all, it was a good night. We ate lots of yummy food and enjoyed the company of friends. We hope you all enjoyed the holidays and with you lots of love, happiness and laughter in 2008! 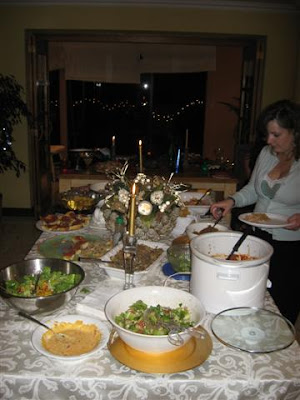 It's been quite a while since I've updated...sorry! As most of you know, I have a new job. I am working at the Embassy as the Move Coordinator. They are building a new embassy and I am working with all the agencies to prepare for the move. It's keeping me quite busy as there is LOTS to be done before the actual move. It's nice to be busy and Ronnie and I get to have lunch together almost every day.


This is a bit out of order, but we didn't get the picture from our friend until recently. Our Thanksgiving: 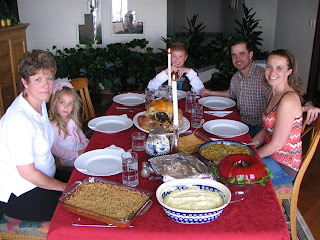 We went to Ronnie's co-worker's place and his wife made an AMAZING dinner!


We had a wonderful Christmas. It was a nice day spent at home for just the two of us. We had lots of invitations to spend the day with friends, but we decided since we couldn't be with family, we would spend our first Christmas as husband and wife alone. We pretty much stayed in our PJs for most of the day, cooked a great meal and watched football. We opened gifts then went straight to the kitchen to start preparing our lunch. The mashed potatoes you see were mixed with my brand new Kitchenaid Stand mixer. It was lovely! 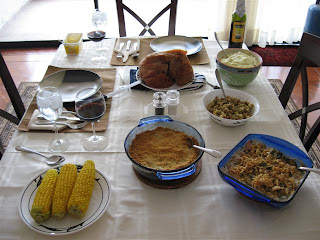