Ron and I did quite a few of our training runs on the track at Herzliya Park.  Ron pushed the kids in the stroller then we'd let Kaitlyn run off some stream at the playground.  The last time we were there, Kaitlyn was open to trying out the zipline so we let her give it a shot.  Our little dare-devil was awesome and seemed to enjoy it.

Email ThisBlogThis!Share to TwitterShare to FacebookShare to Pinterest
Labels: Kaitlyn

For the past 6 months, I have been training to run a 5K.  Last week I actually reached my goal and yesterday I ran my first official race.  While the race wasn't a full 5K (it was a 4.2K), it was the perfect first race for me.
The Tel Aviv Marathon is a pretty big deal.  There were thousands of participants all running different distances--the full marathon, half marathon, 10K and 10% (4.2K) races.  We woke up bright and early and donned our race shirts, which were pretty sweet, and the rest of our running gear. 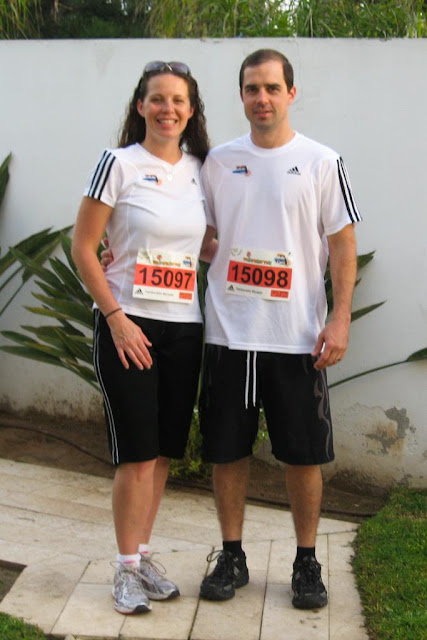 We arrived in Tel Aviv just under an hour before our race's start time.  Luckily, we didn't hit any traffic and had no problems finding parking.  The long distance races had already begun and as we made our way to the Pre-Start Zone we played "Frogger" crossing the race route. 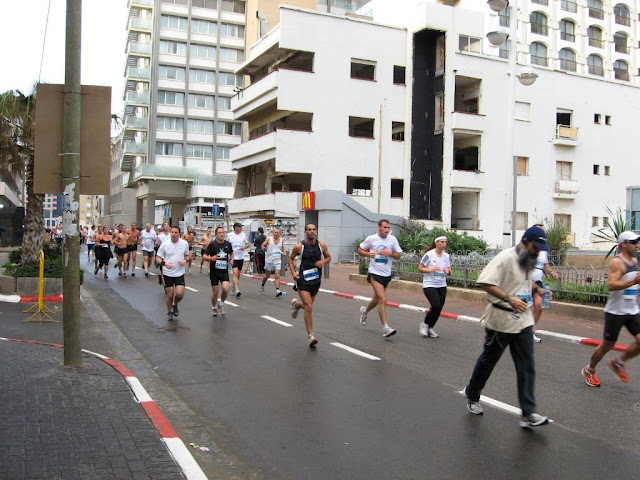 As we waited for our group to be called to the Start line, I was a bit nervous.  Although I've already run longer distances than this race, I assumed we'd hit some hills because our route took us south into Jaffa.  I wasn't sure how difficult that would make it.  I also got the achy I-feel-like-I-might-be-getting-sick feeling, which didn't help.  Nerves and achiness aside, I was still pretty excited.  The loud, up-tempo music (that made me want to fist pump like I was on Jersey Shore) helped boost me up. 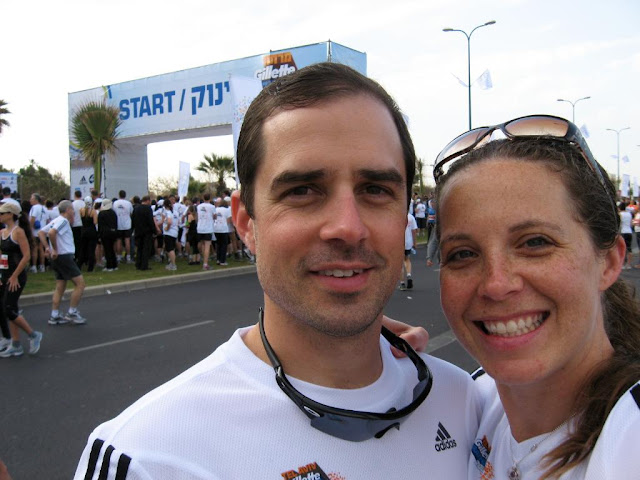 I was pumped and when the start gun fired...I just stood there...it took a few seconds for the crowd to thin out so we could actually move and 16 seconds later I officially crossed the start line and we were racing! 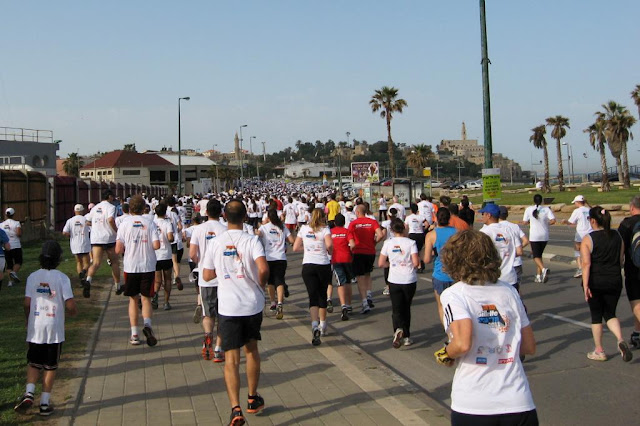 Let me take a minute to clarify what "racing" meant for us.  Because this 10% race was part of a much larger and more prestigious marathon, we didn't have timing chips so there was no official recorded time for our race.  Most people ran, but lots walked and many people took short cuts on the semi-confusing route. 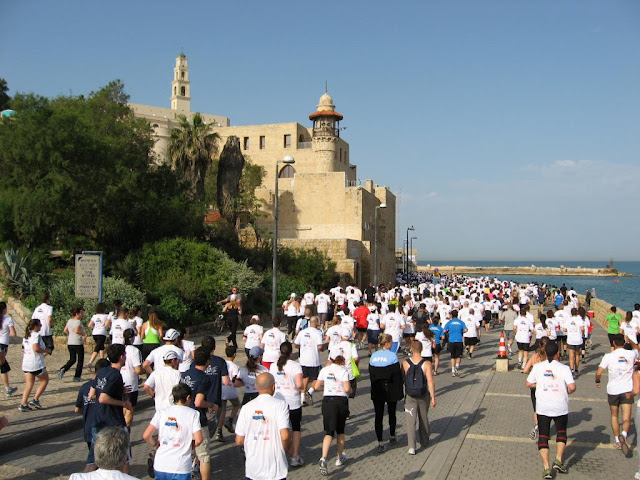 The race route took us through the Jaffa Port and it was beautiful.  It was an area Ron and I had not been to yet and it was neat to see new surroundings.  It wasn't nearly as hilly as I expected and most of the way we were shaded by the buildings. 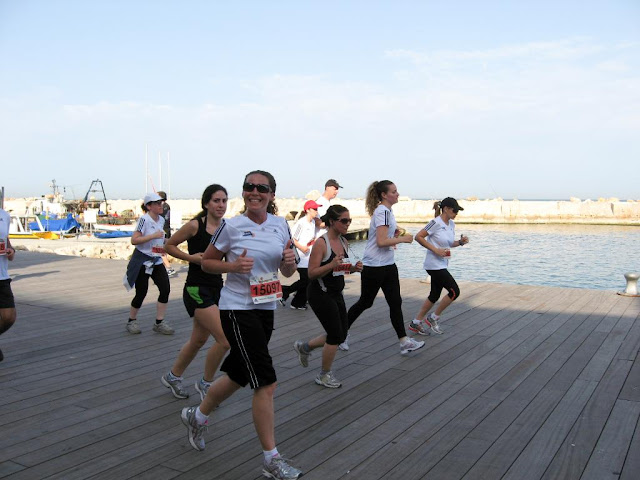 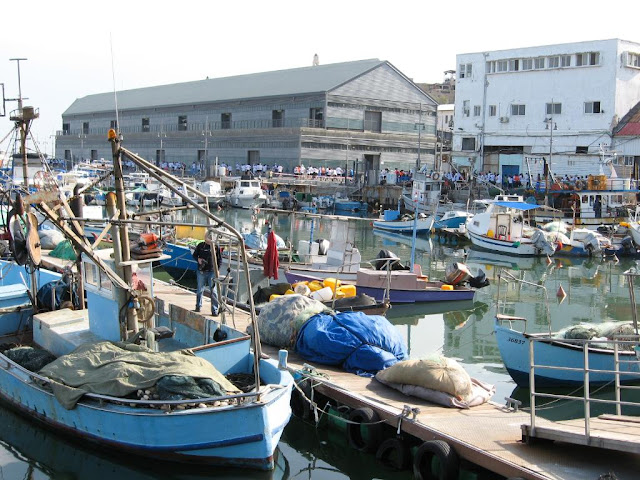 During the race I felt great, but I think the sun made me a little sluggish towards the end. 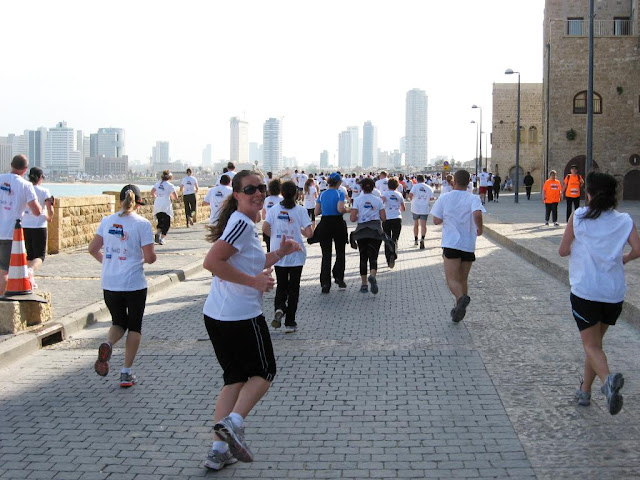 Again, because we were the red-headed step children of the race, we kind of got jipped on the fancy Finish line structure.  As we neared the end of the race, we were looking for the large Finish, but as we got closer we realized the small, red, inflatable arch was our finish.  Ron ran ahead of me at the end so he could snap a picture of me crossing the finish line. 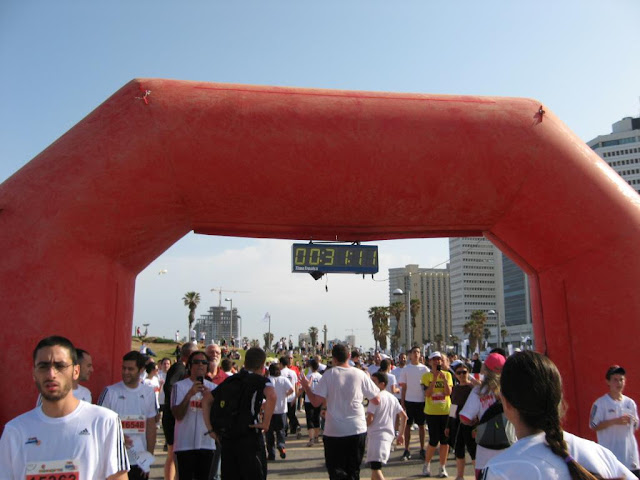 He took the above picture just before he crossed and I crossed about 10 seconds later.  Minus the 16 seconds it took me to cross the Start line, my time was approximately 31:05.  It was a bit slower than my average pace during my training runs, but that's to be expected with the crowds.  I'm happy with it and honestly, I'm just glad that I was able to complete it without walking and I didn't come in last. 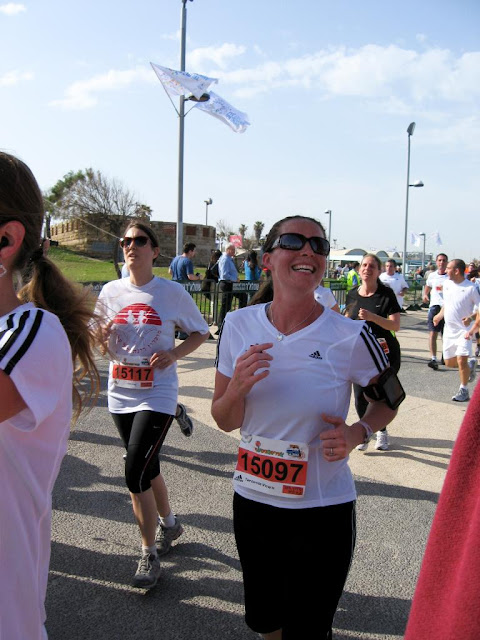 I am very proud of myself and have Ron to thank for helping me accomplish this goal.  He's been encouraging and supporting me throughout my training and it was nice to have him by my side during the race.  It was a great day and with one race under my belt, I'm eager to run more.  I look forward to running a full 5K race next week and I hope to complete a 10K race in the fall. 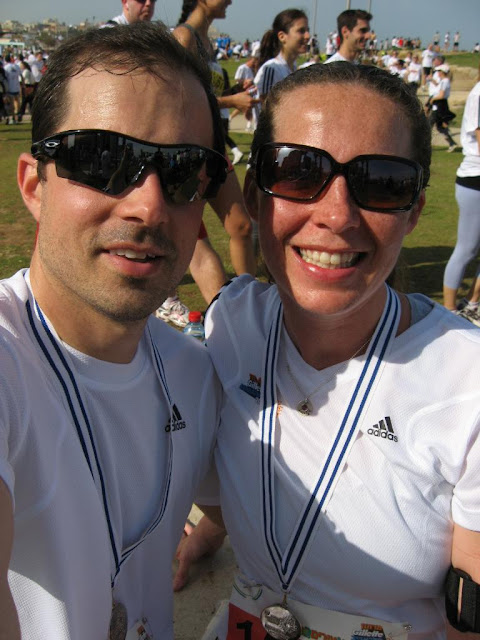 Tomorrow is race day and I am beyond excited!  The C25K program has been such a success and I still can't believe I'm able to run a 5K.  I'm technically on Week 8 (it's a 9 week program), but last week while near the end of one of my runs, I decided to keep going...and going...and going and I didn't stop until I ran 5K.  I was SO proud of myself--I felt great and best of all, I didn't pass out or worse, die!  It felt so good that I ran another 5K on Saturday.  Not only have I stuck to the C25K program, but I reached my goal sooner than expected.  Holla!! 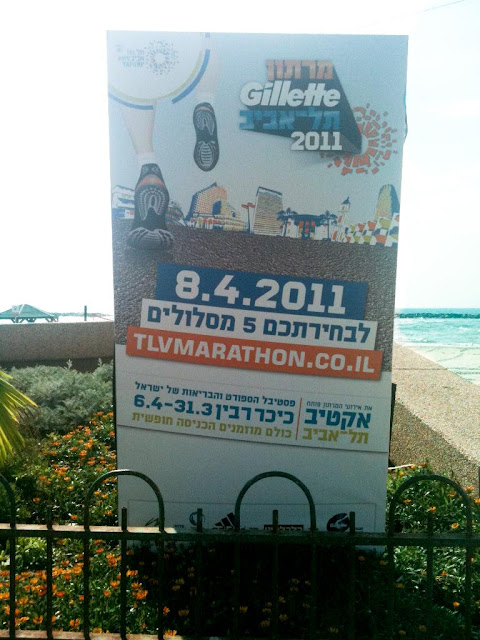 I look forward to experiencing my first official race, although I won't be doing anything but trying to finish, not beat any time or person.  We're only running the measly, little 4.2K, but I'm as excited as if I were running the marathon. 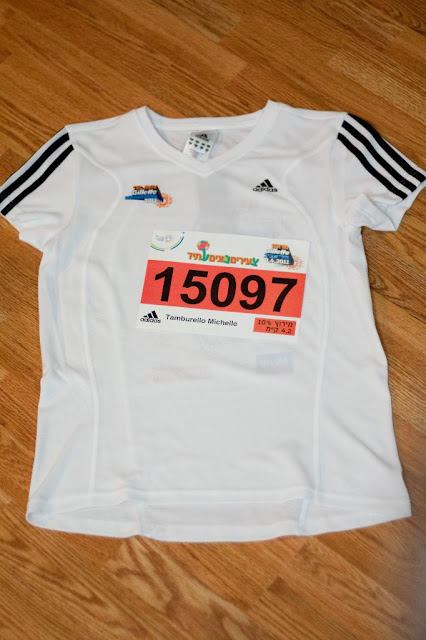 Jonathan continues to move (quicker every day) and pull himself up onto everything. This time, he pulled himself up using Kaitlyn's drum, then used it as a walker. :)