Just over a week ago, Jonathan took his first step, but days went by before he took anymore.  This past Sunday he finally decided to try again.  I got a video, but as I was uploading it to YouTube I deleted the original file and realized the upload didn't work.  I haven't been able to recover the file, but I'm still trying.  I promise to get some more footage of the baby steps soon.  In the meantime, check out what else he's doing.  Apparently, his sister's been teaching him a thing or two.

Kaitlyn has kept us busy with all of her climbing and it looks like her brother is following in her footsteps.  As if walking wasn't enough!

Email ThisBlogThis!Share to TwitterShare to FacebookShare to Pinterest
Labels: Jonathan

It's been a week since I've started our Summer Schedule and we've been having fun!  Last week we spent some time finger painting, playing at the pool, playing with friends at our weekly play group and for our baking day, we made some yummy oreo cupcakes.

Jonathan did some crawling around the kitchen while Kaitlyn and I prepped the cupcakes.
I'll be honest, Kaitlyn lost interest in these pretty quickly.  After we crushed the oreos, I pretty much finished making these all on my own.  I think this week's Wednesday baking day will include brownies.
at 7:16 AM No comments: Links to this post

Ron is always coming up with silly little songs to sing to Kaitlyn and she loves them.  When we're in the car, she'll tell us, "Sing Kiki song, Daddy!"  We know that means this one:

(Sung to the tune of I'm a Little Teapot)
I'm a little Kaitlyn, short and sweet
Here are my hands and here are my feet.
When I go on the potty I get a treat.
My little Jonathan is pretty neat.
It's one of her favorites.
A couple of days ago, Ron came up with another song.  Take a look at what she's learned from it:

(Sung to the tune of The Alphabet Song)
K-A-I-T-L-Y-N, that's how you spell Kaitlyn
K-A-I-T-L-Y-N, that was fun, let's do it again.
I give all the credit to Daddy for this one.  He's taught her to spell her name...and she's not even 2 and a half.  That's pretty stinkin' impressive if you ask me!

Email ThisBlogThis!Share to TwitterShare to FacebookShare to Pinterest
Labels: Kaitlyn

Last week, I took Kaitlyn to the park.  She was more interested in using the exercise equipment than the slides and swings.  Maybe I should take a lesson from her.
***************************************************
We have reached a new milestone with Kailtyn:
Naomi is a friend of Kaitlyn's who inherits many of the clothes Kailtyn outgrows.  She was much happier with the thought of Naomi getting her binkies instead of just throwing them away.  Whatever works!  The good news is, it looks like binkies are a thing of the past!  Sometimes when she's going to sleep she cries for a binky, but quickly calms down when I remind her that we gave them to Naomi.  Then when she wakes up, she's so excited to tell us that she doesn't need a binky.  It's only been three days, so I suspect she'll stop asking for them all together after a few more days.
*******************************************
This little guy is hilarious.  He's becoming more and more interactive and his personality shines more everyday.  He and Kaitlyn can really work themselves into a fit of side-splitting laughter.  It's awesome.


************************************
Kaitlyn hasn't made much of any progress on the potty training front lately.  She's even stopped using the potty as a stall tactic before bedtime.  She has shown an interest in wearing big girl underwear and finally agrees to sit on the potty first thing in the morning.  A couple of months ago, a friend sent me some info on the 3-Day Potty Training Method.  She raved about it and I have since heard from other people that have used it and say it worked like a charm.  I would love to give it a try, but my problem is I don't know how to keep Kaitlyn by my side and run her to the potty at any given moment when I'm also focusing on Jonathan.  Just yesterday, Ron put her in underwear first thing in the morning.  We kept reminding her to tell us when she had to go.  As I removed Jonathan from his high chair after breakfast, Kaitlyn left the kitchen.  By the time I had Jonathan cleaned up and ready to go upstairs, I found Kaitlyn squatting in a corner.  Ron and I are thinking about maybe studying the material this week and giving the method a shot next weekend.  Because of the long weekend, Ron will be home to help keep a watchful eye on Kaitlyn and hopefully by the time he goes back to work on Tuesday, we'll be over the biggesst hurdle.  If we do decide to give it a go, it means staying home all weekend.  So, we'll see.
*****************************************************
Remember what a superstar swimmer Kaitlyn was last year?  (To see proof, click here and here.)  It was awesome, but sadly it is no more.  She has completely lost her love for the pool and will only play on the steps.  We've tried to strongly encourage her, but she ends up miserable and wants to get out of the pool and go home.  She won't even let us hold her in the pool--she clings to us and cries that she wants to go back to the steps.  We've laid off a bit and just let her play and get comfortable with the water again.  In the last couple of days, we've seen some great progress.  On Friday, we got the video below of her putting her face in the water and and yesterday she allowed Ron to hold her in the pool and when she'd "boing him" on the head to make him go under water, she would hold her breath and go under with him.
***********************************************
And this guy did a whole lot of standing this weekend.  Video coming soon.
******************************************
We had a nice relaxing weekend filled with time in the pool, quiet time, church and food on the grill.  Hope everyone had a great weekend!
at 2:51 PM 1 comment: Links to this post

In my attempt to find more creative ways to fill our summer days (no, I didn't mean for that to rhyme) I bought a bunch of art supplies from Amazon.  Last week, our shipment came in and yesterday I introduced Kaitlyn to finger paints.  (We actually had a trial run with finger paints last week at a friend's house and Kaitlyn thought they were great.)  I didn't tell her what we were about to do, I just told her to get ready for a surprise.  I taped a piece of paper to the outside of our sliding glass door, covered her in an old t-shirt of mine and brought out the paints.  She was very excited!

﻿Doesn't she look like such a big girl in that photo above?
Jonathan enjoyed the nice weather while he watched his sister's creativity play out on paper.
The view from inside.
Kaitlyn thought it was very exciting that she was allowed to clean her hands on her shirt.

﻿I'm hoping to start a schedule of sorts for the summer where we have something semi-planned everyday.
Along the lines of this:
Monday = Arts & Crafts Day
Tuesday = Play group & Pool Day
Wednesday = Baking/Cooking Day
Thursday = Get out of the house Day (park, mall, beach, etc)
Friday = Help Mommy Clean the House Day
I'm only kidding on that last one.  I haven't figured out a plan for Friday--it may just be a wing-it kind of day.  What are your summer plans?  Do you have a schedule for your kids?
at 7:10 AM No comments: Links to this post

On Father's Day, we decided to take our first trip to Jerusalem.  It's only about an hour and 20 minutes from us and we left right after church so the kids would have a chance to nap while we were on the road.  Our plan was to just go for lunch and walk around a bit and not worry about seeing any of the major sites.  There is so much to see in Jerusalem and we knew we couldn't do it all in one day and we weren't sure how much would be accesible with a stroller and 2 little ones.

We arrive just before noon and walked to Mamilla Mall where we had a nice lunch.  Luckily we were close to the Jaffa Gate so we headed into the Old City.  It was a maze of small streets and alleyways lined with colorful shops. 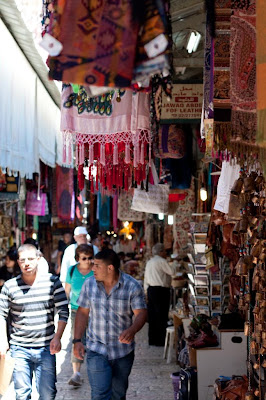 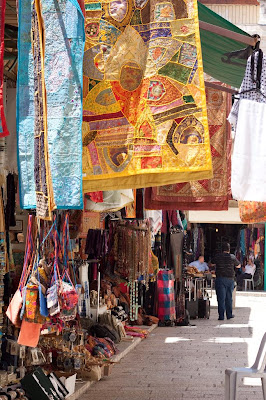 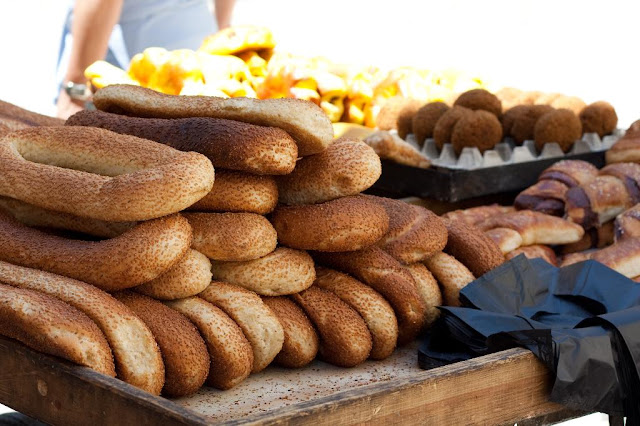 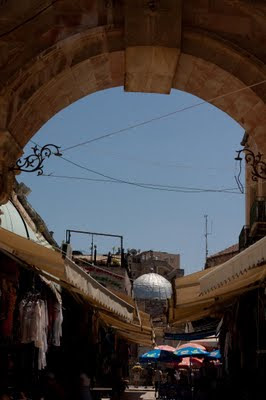 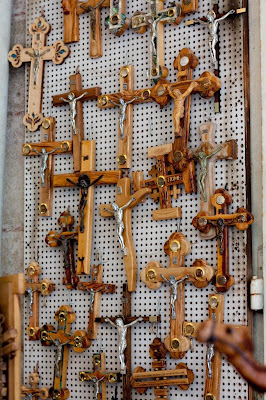 We happened to stumble upon the Church of the Holy Sepulchre.  In true Tambo Family fashion, we walked in and asked each other "What happened here?"  Ron and I are notorious for not doing enough research prior to visiting historical sites.  Much of our siteseeing in Italy consisted of us visiting a historical/religious monument, then stopping in the gift shop to quickly read up on the history.  In our defense, we didn't do much research this time because we didn't have a true plan for our day and didn't know which sites we'd even get close to.  We vow to really do our homework before we return!  However, with the little bit of reading we did the night before, Ron knew that this church was built over the place where Jesus was crucified and also contains the place where He was buried. 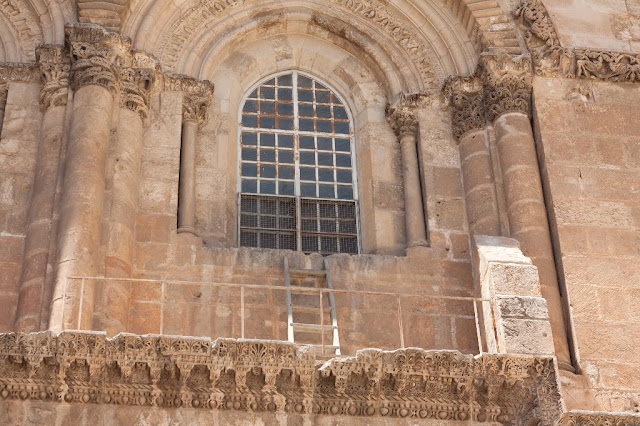 I didn't get many pictures inside, mainly because I wasn't sure if pictures were allowed and I knew I'd be back. 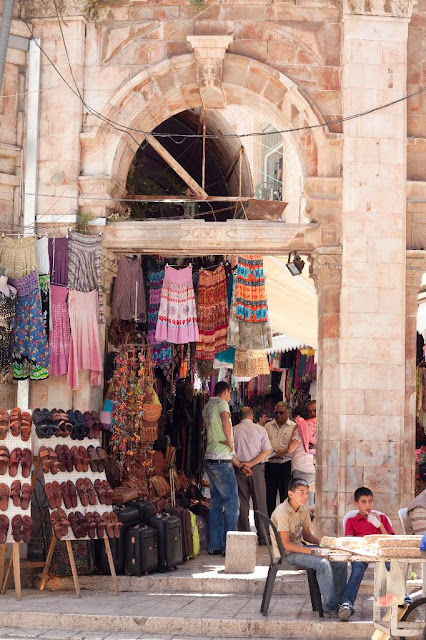 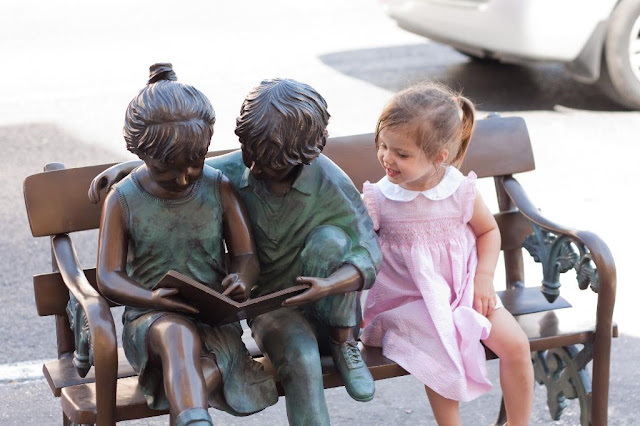 It was a very nice day and I'm glad we took the trip over there.  Next time we go, we'll be more familiar with the area and have a better idea on how to plan our day. 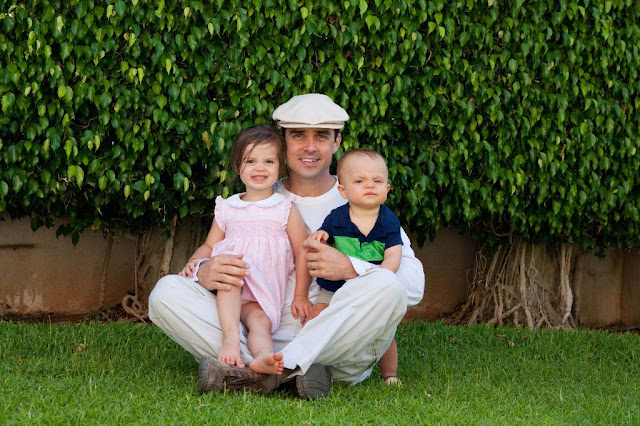 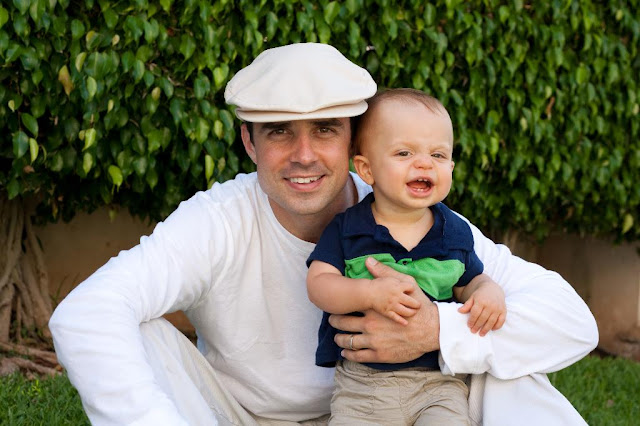 Those kids are lucky to have such a wonderful dad.  And I'm equally as lucky to call him my husband.  Happy Father's Day, Bubba! xo
at 2:58 PM 1 comment: Links to this post

A Morning at the Beach

We woke up this morning and decided to head to the beach bright and early.  We arrived just after 7:30am.  I'm pretty sure the last time I was at the beach that early it was to watch the sunrise after a night out. I was surprised how many people were already out on the beach.  We got one of the last spots in the public parking lot then went to claim our spot in the sand.
Waiting for Daddy to sent up our tent.
Although there were already quite a few people, we beat the large crowds and the intense heat.  We had lots of fun before it got too hectic and packed our bags to head home just in time for the kid's naps.

Even though it was only 9:30am, we couldn't think of a better way to end a day at the beach than with some yummy ice cream.
The next time we go to the beach, we'll definitely plan on another early arrival.
at 2:37 PM 1 comment: Links to this post