A little over a year ago, my friend Rachel started organizing a food packaging event called "You(th) vs Hunger" for our church.  We needed to raise $25,000 to purchase the supplies to package 100,000 meals for people living in poverty in Guatemala, Haiti and Nicaragua.  She worked along side Cross Catholic Outreach to purchase the supplies and promote the event, but it was just her and her husband trying to spread the word and unite a church with over 19,000 parishioners to come together and support her cause.

I loved the idea and the program and quickly agreed to help as much as I could.  I've helped her sell donuts and raffle tickets, collect donations, pass out bracelets, count money and organize volunteer sign-ups over the last 12 months.

And last weekend, on April 9th, we did it!  During four 2-hour shifts, hundreds of members of our church came together and collectively packaged all of those meals!  It was a long and exhausting day, but such a fun day, as well!  Here are some pictures of the day:


I think I can speak for all of us when I saw we had a great time!  The kids had fun and it was nice to serve together as a family in such a meaningful way.  We look forward to next year!
at 12:57 PM No comments: Links to this post

Yesterday, I ran in the 2016 Credit Union Cherry Blossom 10 Mile Run.  Although, I hadn't trained as diligently as I had for the half-marathon last September, I was excited for the race...mainly because it was my first race in D.C. and it was (supposed to be) Cherry Blossom season, which would make for a beautiful course.

The day before the race, I received this email: 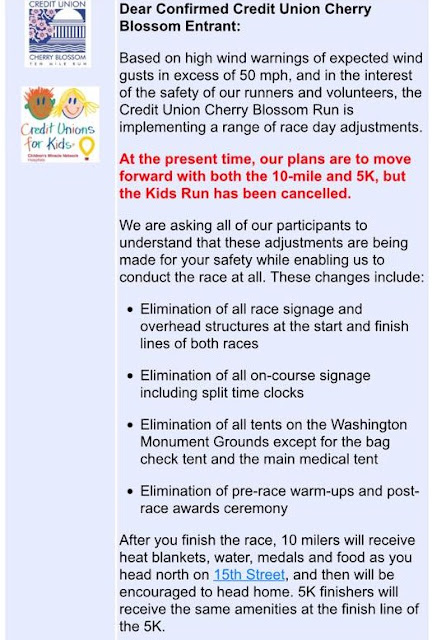 I'll be honest, there was a part of me that would have been o.k. with them canceling the race.  The thought of running in such freezing winds was not fun.  I was stressed the night before trying to decide how many layers to wear.  In the end, I opted for fleece-lined leggings, a tank, long sleeve tech shirt, long sleeved t-shirt (which I had planned to just toss if I got too warm) and a half-zip pull-over...plus ear warmers and gloves.  I ended up forgetting the gloves in the car, but luckily my friend Khairul had an extra pair.  (FYI - She's also the one that took most the pics I'm posting.  My phone was strapped to my arm so I wasn't able to take many.)


Once we arrived at the race site, I quickly decided I would not be tossing any clothes and considered picking up clothes that other runners were tossing :)  It was FREEZING!

Standing around waiting for the race to start was the toughest part.  By the time we got started, my fingers and toes were numb.  It felt so good to get moving and once we did, it wasn't so bad.  The winds picked up every now and then and luckily some of it was a nice tailwind to give me an extra push.

The route was still very pretty and I loved passing all the monuments, but I was really disappointed that all of the blossoms were gone...a combination of them peaking a week or so earlier and the winds blowing off what was left the night before. 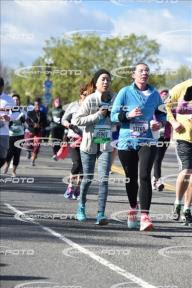 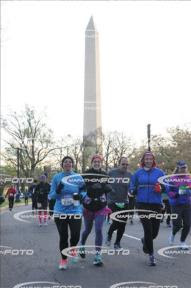 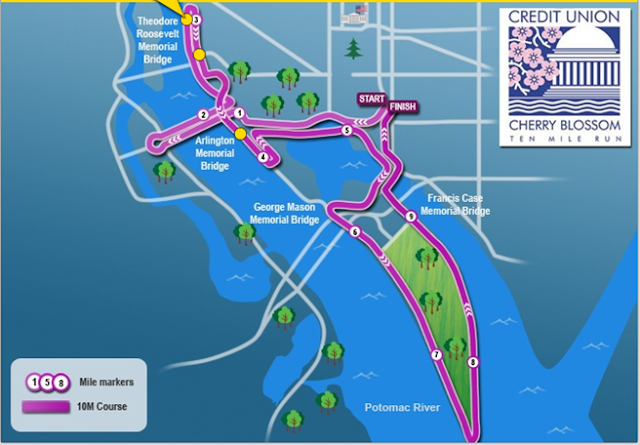 I was happy to finish in under 2 hours...even if it was just barely under.  My last 10 mile run was a training run for the half marathon and I did that in 1:55:22.  Considering I've been injured, I hadn't trained as well and all the winds, I'm happy to only have been 4 minutes slower. 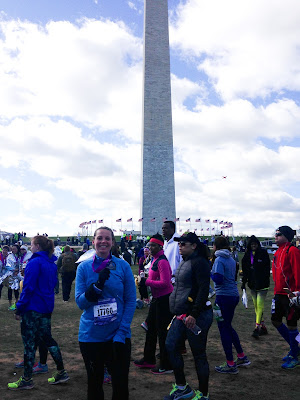 Ten miles was enjoyable and I'm happy to say I'd do another race of that distance.  For now, I'm going to focus more on my IT injury and try to get that under control before signing up for another long-distance race.